I love the biblical story of Jael and Sisera and you should too.

It goes something like this: The prophetess Deborah has told one of the Israelite tribal leaders that now would be an excellent time to mobilize against a local king who has been oppressing them. The leader, Barak, hesitates. He will only go to war, he says, if Deborah joins him. Deborah agrees to accompany the army, but she also warns Barak that because of his hesitation a woman will get to kill the general leading the foreign king’s army.

After a messy battle, the leader of the enemy army, Sisera, flees to the home of a guy whose tribe is handily not involved in the war. That guy is married to a woman named Jael. Sisera asks Jael for some water, but instead she brings him milk and a rug, and encourages him to rest. Before falling asleep, Sisera commands her to stand guard at the entrance to the tent and tell anybody who might pass that nobody is in there. Yup. Nothing to see here. Move along. In itself, that seems like a terrible plan, but it gets worse: Jael is secretly on the side of the Israelites, so while Sisera is sleeping she goes into the tent and uses a mallet to drive a tent peg through his skull.

The original story is extremely devoid of sex. Let me make this clear: sometimes a peg is just a peg. There is nothing sexy about hammers and impaling. Ahem. I’m glad we got that sorted out.

Enter Western art history. Artists have leapt at the opportunity to paint hot ladies – with varying degrees of unnecessary boobage display – who are daintily inserting metal nails into the skulls of sleeping men. The results are fantastic: equal parts murderous determination and draped dresses accidentally exposing nipples, as Jael raises her arm to carry out the deed. Enjoy.

What do you mean, am I holding a hammer?
Oh my cleavage hammer?
I should have thought you’d rather like that hammer.

If you people could just go elsewhere with your praying and your staring and your manly modelling of hats. I think I’ve got this night’s assassination covered on my own, thanks.

Ok. Ok. Pull yourself together, Jael. Pull. Yourself. Together. Yes, he’s got a nice ass underneath all that armour, but that’s not what you’re here for.

A hammer, a tent peg, and zero fucks left to give. 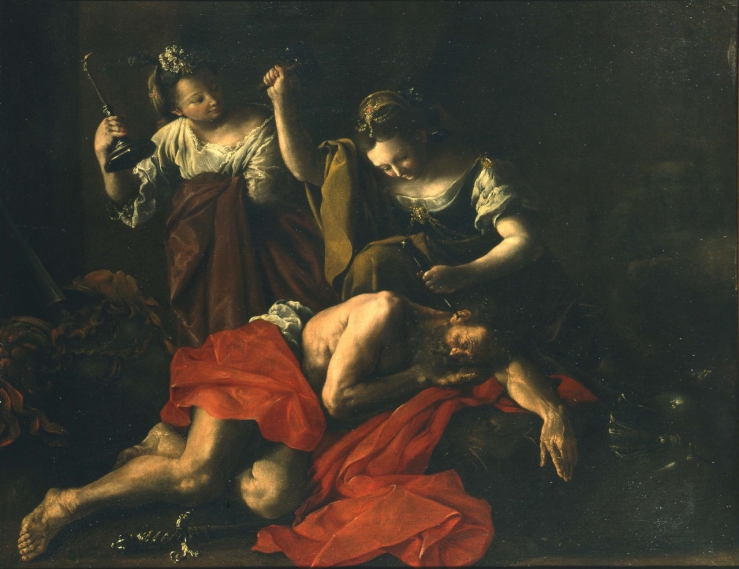 Jael… Jael…
What is it now?
Just… well… I still think perhaps we ought to try talking to him about it first
I swear to God, Gertha… Just hold the lamp still, will you?

And if I loosen my collar just so… and tilt his head away from me like that… then maybe I won’t get too much blood on my dress.